Ok, today's comparison is the Storm creature we all might know as the Triton. As you know I will show you what is different, and what is the same. Ok, here is the Wizard 101 Triton. ( I decided to do the statue one because he looks cooler when encased in stone. :)

As you can see he wears a crown on his head dictating that he is probably the king of the sea. He has no legs just a storm tail thing. And he bears a spear in both hands. Now I will show you a couple Triton images you might not know. Ancient ones.

Ok, this one may be a little difficult to see but, it is Triton, who back then in Roman Mythology was the Roman god of the sea. And on this ancient plate, he much looks the a Merman. A difference from the Wizard 101 Version. Ok, here is another ancient Triton image. 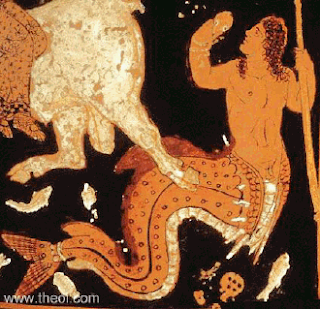 This one looks like the Merman again but looks way younger. What I can say about the similarities is the spear and the tail. Here is a Triton who you might recognize. I cant say ancient though on this one. 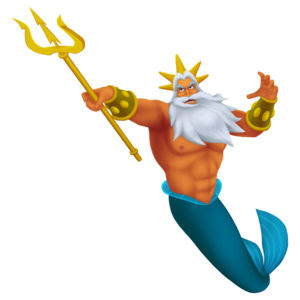 Yup you said it. The little mermaid's father, Triton. Ok, to the similarities and differences. He looks human on top like the other two. But, he also bears a crown like the Wizard 101 Triton. So I guess you can see the Wizard 101 Triton is made up of a whole bunch of other versions of different Tritons. Well, that's today's comaprison folks. Till next time, I'm Isaiah Spelldust.
Spell Casted by Isaiah Spelldust at 5:35 AM

:D nice one nice use of the little mermaid!!