Here is another Wizard Wannabees comic! Click to enlarge. 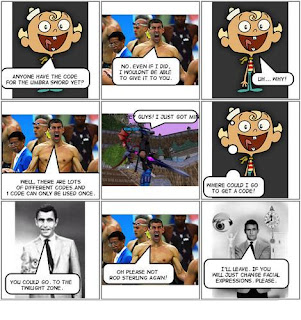 Here is another episode of Wizard Wannabees! (click to enlarge) 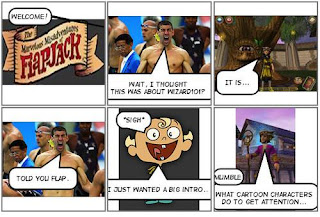 I went to Wal-Mart today, and came across the Beckett Magazine ( completely unexpected, it wasnt even in the magazine section! ) and got the Umbra Sword code. It is a really cool sword but, I dont like the damage ( *shudder* takes me back to days of Krokotopia ). Other than that, its pretty good. I would give you a couple pictures of it but frankly Fraps hasnt been working properly for me lately. But when I get it working I'll whip out a couple sreenshots of it.


Cya round the spiral!

Here is part 2 of the series, Wizard Wannabees. ( Click to enlarge ) 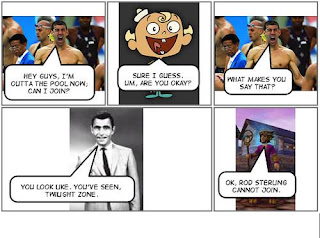 Things To Look Forward To

I would like to end the day with a post to show you what this blog will have the next month and a half. Here are a couple things to look forward to:

-Continuous Comics of the Day ( Along with the comic series, Wizard Wannabees )

-The Defenders Race Across The Spiral ( No reports of activity on that yet, but will happen somewhere in late August or September )

-And Various Post-Specials yet to come

That's all got for you guys today!

You all know what I end each post with. The usual "~" and "Isaiah Spelldust" well, I did a little W101 Blogosurfing and found out it want just me with ending things like mine. Homework In A Graveyard uses "Be well." after each post I've noticed. We all well know that Friendly uses his famous "Happy Dueling!". I like what Sean Emeraldweaver uses after each post. He does his name and leaves what level he was when he did that post. Like a little "Levelog" or something. And Valerian over at his School for Wayward Wizards has his "Valerian and Vale" thing going on. I think it's important when you run a blog that when you are finished with each post you have some Signature to end with. It "defines" you, makes you unique. It gives you blog it's own personality. And soon when your blog has a good rep, and you post often, then end signature becomes sort of like a habit. That's my opinion on this. I got my little tilde Signature idea originally from Greyrose every time I got an e-mail from her, or when she is done writing something on the Wizard101 Forum. So, if you are going to start a blog, make up a little ending thing at the end. So when you send a comment to someone else or a message, you might accidentally put down your ending cause your so used to it. That's okay, you should do that so they could recognize who it was or something like that. Hope you got something outta this. Well, I am going to go see The Half-Blood Prince. I heard it was really good!

Here is a start to another good comic series, Wizard Wannabees! 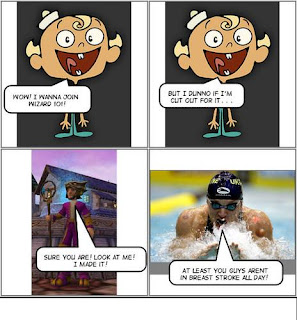 The final day has been postponed to August 25th. Make sure to get those comics in by the deadline!

Hello wizards. This post today is another idea by me about the game Wizard 101. This idea would be good I think. You know the Fairgrounds in the Commons right? Well, what if it was like a theme park. Or like had an entrance to one. And every attraction had a different game. But, the catch is you need "Wiztickets" to play most of these games. These Wiztickets could be found in treasure chests, or maybe in boss battles.

Now, varying on which type of ride varies how many tickets it costs. If it's a really good attraction, then the prizes you could win would be more rare and powerful. Say if it's a free ride, then you would probably might get like lvl 5 gear and things of that sort. The highest level ride there would be would cost maybe 7-10 tickets. Which would have stronger winning gear ( level 45-50).

And maybe you could find vendors all over the spiral that sell things like Wiztickets and maybe special passes that get you onto specific rides. For each ride would be a different game. And it maybe a little difficult for KI to come up with more games but they could pull it off. They could use some of the games they already have setup and use them for a couple rides. I have a couple suggestions for games.

- A game where you have to mix certain things in a potion or a cauldron. But you would be timed andif you messed up you would have to start all over again.

-A game for high level wizards called Flying Drake; you sit upon a drake and have to dodge certain obstacles. You collect things along the way to gain points. The more points you get the better the prize.

Just a couple ideas to think about. I got to thinking about this after I came back from Cedar Point. 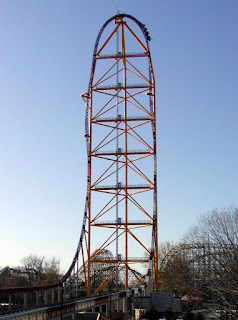 Yup, that's the Top Thrill Dragster. Probably the most fastest and highest roller coaster I've ever seen and ridden. If you havent heard about it, it launches you 0-120 mph in 4 seconds, then climbs a whopping 420 feet. Stops a little at the top, and plunges down. Both the up and down "rises and falls" of this coaster are directly vertical ( except for the turns at the top.). If you are a thrill seeker, I recommand riding it. I think my stomach is still up at the top.
That's todays post!
~Isaiah Spelldust
Spell Casted by Isaiah Spelldust at 8:40 AM 1 comment:

Hello wizards! Sorry I havent been posting; I have been busy with marching band and things. Well, this MIGHT be the last day for comic entries. From the looks of the e-mails, I might extend the date to give a chance for more entries. Well, you can expect more posts flowing in! Hope you get those comics in.